Running an Ultra Trail in a Vibram FiveFingers 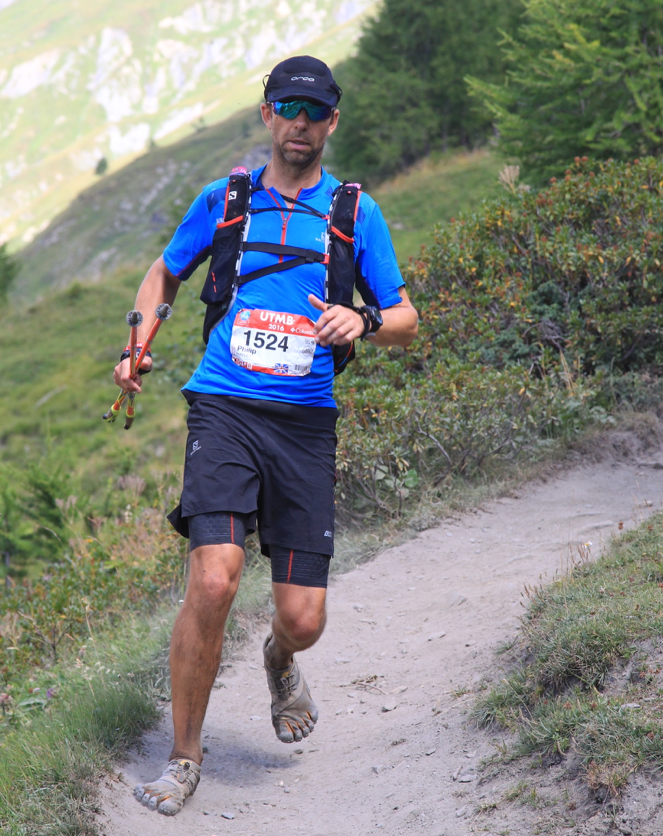 Philip Haylett is 41 years old, comes from Oxford, GB and is borderline obsessed with running. He is pretty much constantly thinking about what races he would like to do, which ones he has done and where he would like to run.

He only wears Vibram FiveFingers, except at work, when he wears “normal” shoes.

Philip is an executive in an IT company in London and also a running coach. He teaches others how to improve their running technique.

Sport has always been important to him, whether it be rugby in school, scuba diving or mountain sports. Like many others, his professional life took priority over sports, but about 8 years ago they got back to running. One of his friends was racing a Vibram FiveFingers. He figured he was going to try.

It took 2 months of blisters and attempts before someone explained to him how he should run. After another 10 months of practice, he competed in the Dublin Marathon which he finished in 3:34. He vowed never to go such a long distance again.

The following month he signed up for a 75km race and hasn't stopped running ultras since.

How to make the transition

But before all of that, Philip, like many others, had broken the rules of a transition to minimalist shoes, without cushioning or "protections."

His first outing was 7km to go to dinner with a friend, then return the next day. For a week, he couldn't walk.

He persisted, but instead of real progress he mostly developed blisters in his heels and aches all over the place.

Once someone explained to him the importance of a good stride and how to make that transition from heel to forefoot support, he started to improve. Having understood how to improve his technique, his posture naturally became more upright. He increased his pace, and became a more efficient runner, with a lighter stride.

Today, Philip integrates his practice into his daily life. He starts in the morning by running 5km to the station to catch the train to London. Then another 7km before arriving at the office. Longer races are booked for the weekend, as well as strengthening and interval sessions. He never runs more than two hours at a stretch.

Participating in an Ultra trail, in this case a 168km race, requires significant physical and mental preparation. It’s not something to do on a whim. All the more so when the shoes you wear will not hide anything from the environment. The thin and flexible soles inform the sensory sensors under the sole of the foot of every roughness, of every small (or big!) Pebble. The body will then respond according to the perception of the terrain and its intrinsic capacities.

So how did he prepare for this race?

“It is very difficult to prepare for a race in the Alps when the nearest hill is only 80m high! So I spent a lot of time doing hill training on my little mound. Closer to the date, I did a few races in Great Britain which helped, but none involved three hours of continuous climb! "

“The hardest part about running a Vibram FiveFingers on technical, rocky terrain is that you really have to focus relentlessly on the placement of each step. You have to be careful of the little toes that are exposed. ”

“In the descents, the others were passing me at full speed with their padded shoes, where I had to pay attention to every step. It's disappointing to get passed so close to the finish, just because you can't do like them and jump just any way. "

Philip loved the snowy parts of Col des Pyramides and the sunrise over Lake Combal the most. Running through a severe thunderstorm in the middle of the night was an incredible experience. Without forgetting, of course, the arrival!

The hardest part was the pain in his knee ligament which became acute around 100km.

Philip's advice for other athletes who would like to start running in Vibram FiveFingers or more generally minimalist shoes:

“If you've ever run with FiveFingers, you know that you have to pay attention to the placement of the feet, not to land on the heel, because even with a forefoot support, you sometimes touch the heel and it can hurt a lot. It's hard to focus on your technique for 40 hours, it's a mental battle but it's worth it!

You have to get used to the idea that the transition will take time, but once the right gestures have been acquired and the body accustomed and strengthened, there is no going back!

You have to train on paths and terrain similar to racing. Riding in FiveFingers for 3 hours is not a problem. Coming down is another story, so try to do a lot of technical downhill practice.

Also, you have to be comfortable at night, in the dark. ”

Most important to Philip is the notion of self-fulfillment. Feeling the terrain and becoming one with the nature that surrounds you provides a unique pleasure that you cannot find with any other shoe.